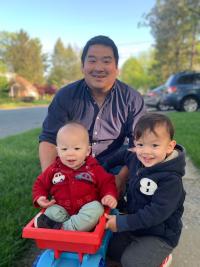 Adam Hosey is an abolitionist educator, Philly nationalist, and sandwich connoisseur who lives in Lancaster, Pennsylvania. He was born in Busan, South Korea, and after two years in orphanages was adopted by an Italian family in the Philadelphia suburbs.

As an educator, Adam has spent his career developing and practicing liberatory pedagogy for his students and school environments and believes that schools should teach students how to be empowered as individuals rather than how to assimilate into dominant culture. He was a founding teacher at the number one high school in Pennsylvania, and created the history and philosophy curriculum from the ground up and took great joy and pride teaching about systemic oppression to the vastly white students in that school. More recently Adam has been working in the demographically opposite Harrisburg School District. There he advocated for, created, and teaches courses in black history and feminist history. He also started and led the district Equity Team. With a grant he won from the Southern Equity Foundation, Adam was able to participate in Racial Justice Institutes and a Train the Trainers with Cultural Bridges to Justice, a social justice consulting company he know co-owns.

Adam currently serves as the Chief Equity Officer of the YWCA Lancaster where he supports organizations and communities to build more inclusive spaces. Taking a data-driven approach, this role highlights areas of need in the county and provides targeted solutions, as well as celebrates the infinite range of joyful individuals that Lancaster county offers.

Aside from teaching and learning, Adam enjoys cooking, having strong opinions about pop culture, and carpentry. He has coached soccer and baseball for over ten years and is a father of two. His oldest, Dylan, is named after Bob Dylan. He and his partner Emily also have two cats named Reuben and Monte Cristo, who are named after sandwiches.