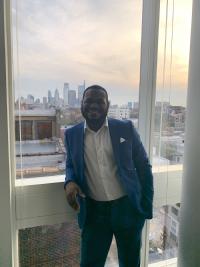 From a young age, Thaddeus has always had a knack for wanting to know more about the unknowns of life. More specifically, the world around him, and the individuals that made it function.

After high school, Thaddeus went on to study at Temple University. His studies included political ethics, state and local politics, business and human rights, and political theory. Throughout his years as a Temple Owl, he served as a Campus Ambassador for Jopwell U, Vice-President of Ethos, and as Special Events Coordinator for the Black Law Students Association, Pre-Law division. That’s when the interest in government, law, and politics really began. This shift caused Thaddeus to become more involved in the communities around him. From door-to-door canvassing in Southeastern Pennsylvania, all the way to Georgia state, he sought to have a positive impact in the communities he was serving, while helping others in the process.

Thaddeus went on to intern with Nationalities Services Center, where he worked alongside refugees and immigrants to help them obtain U.S. Citizenship. He then aided in a fellowship with Joe Biden’s Presidential Campaign, to then interning with the Keystone Budget and Policy Center, where he conducted research on behalf of members of the Legislative Black Caucus. His diversified upbringing and experiences, as well as his background, bolstered his knowledge on various policy issues regarding both state and federal government.

As a Legislative Assistant at Greenlee Partners, Thaddeus sheds light on new ideas, diversity, determination, and perseverance to the evolving realm of Pennsylvania politics.