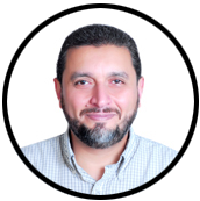 Waleed Farag is a full professor of Computer Science at Indiana University of Pennsylvania and the Director of the IUP’s Institute for Cybersecurity. He oversees the IUP Cybersecurity program which has been designated as a Center of Academic Excellence in Cyber Defense Education since the early 2000s. He received his PhD in Computer Science in 2002 from Old Dominion University, USA. He also has MS and Bachelor of Electrical Engineering both from Zagazig University, Egypt.

Dr. Farag is a senior member of the ACM. His research interests include IoT Security; Cybersecurity Education; E-learning Delivery, Assessment, and Applications; Network Security, Multimedia Data Security, Information Hiding; and Multimedia Indexing and Retrieval Techniques and Applications. He has several contributions in these areas and has published over 50 articles as book chapters and papers in journals, conferences and workshops. His work has been recognized with Best Paper award in ACM SIGITE’2012 and other conferences. Dr. Farag has outstanding records of securing funds to support his research. He is currently the PI of several active federally funded grants. His work in a number of these funded projects has led to the establishment of unique programs and initiatives that contributed to the enhancement of Cybersecurity education at IUP and the surrounding regions. Furthermore, Dr. Farag has served in the technical program committees and as a reviewer for several international journals, conferences and federal agencies including the ACM Transactions on Computing Education (TOCE), the IEEE Journal of Radio Frequency Identification, NSA, IEEE FIE, Springer, IEEE InfoComm, IGI, and several others.